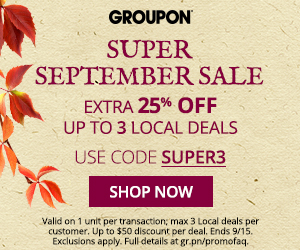 Last Chance Reminder: I originally posted about this deal yesterday. Here’s a reminder that the promo code expires tonight at midnight. This is a very popular deal so don’t miss out!

Groupon.com is having one of their biggest sales of the year by offering an incredible extra 25% off promo code today! I usually see 15% and 20% off codes, but 25% off is very rare so take advantage of the code while it lasts.

Save an extra 25% off any Local deal on Groupon when you enter the promotion code SUPER3 at checkout! The code is it’s valid on up to 3 local deals per customer (usually limit of 1 deal per person)! I’ve tested the code and can verify that it works. The code is valid on a single deal per transaction so you’ll need to purchase each deal individually.

In addition to the 3 Local deals, the same SUPER3 promo code will also save an extra 5% off up to 3 Goods deals and an extra 10% off up to 3 Getaway (travel) deals.

This is a hot deal because most of the deals featured on Groupon is already discounted 50-95% off. You’ll find lots of amazing deals with the extra 25% off (sale on sale).

The promo code works on any local deal in any city in Canada or U.S. (Ie. restaurants, spas, events & activities, heath & beauty, automotive, home, etc…). Valid on 1 unit per transaction; max 3 Local deals per customer with a maximum $50 discount per deal.