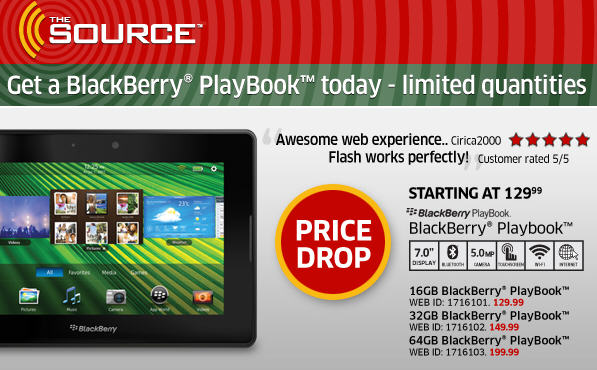 The capabilities of a PC and the versatility of a Smartphone meet in the middle in the BlackBerry® PlayBook™ tablet. Available in 16GB, 32GB and 64GB memory, the PlayBook is complete web browsing, photo editing, MP3 music playing, Social Networking (Facebook, Flickr, Twitter and YouTube), e-reading, an HDMI port for watching movies and document editing for Excel™, Word™ and PowerPoint™ with Documents To Go®. Pair your BlackBerry mobile Smartphone via Bluetooth, with BlackBerry Bridge™ and use it as a keyboard for your PlayBook, as well as a remote for movies, games and more! Run BlackBerry Messenger™ (BBM) on your PlayBook and use it with the BlackBerry Bluetooth Keyboard and Case for laptop-like navigation and comfort.

At the time of this post, The Source has all models in-stock.

Click here to shop The Source online now or for more details.