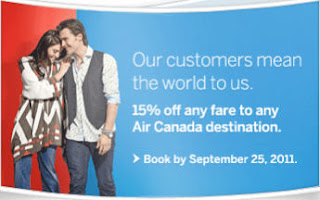 Air Canada has reached a tentative agreement with the Canadian Union of Public Employees (CUPE), representing the airline’s approximately 6,800 flight attendants and will NOT be going on strike!

To thank their loyal customers for their patience and understanding, Air Canada has issued a 15% discount on all Air Canada flights if you book before Sunday, September 25, 2011 at midnight from your city of departure.

Save 15% on any fare to any Air Canada destination!

Click here for more information about this seat sale or to book a flight now.